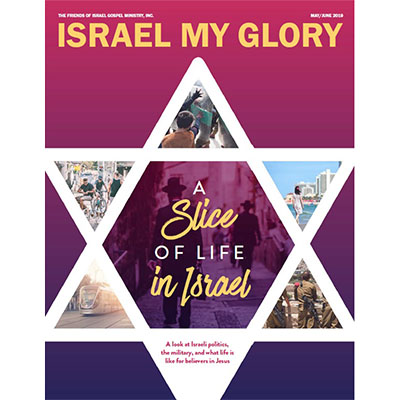 Who is a Jew?
by Steve Herzig
For centuries Jewish people have been asking themselves this question. Today a new wrinkle has developed, and it involves Christians.

A Look at Life in Israel
by Meno Kalisher
What’s it like living as a believer in Jesus in the Jewish state? Pastor Meno Kalisher answers some questions for us.

The Battle for Biblical Truth
by Jim Showers
Here is a look at the critical importance of Israel and why Christians could never
separate themselves from the Hebrew Scriptures.

Israel's Broken Political System
by Elliot Jager
Many Americans scratch their heads trying to figure out Israel’s political system. Here’s an overview of it from someone who truly understands it.

Helping Israel's Lone Soldiers
by Israel My Glory Staff
What do you do when you’re in the IDF with nowhere to go for Shabbat? That’s when the Lone Soldier Center in Memory of Michael Levin becomes a lifesaver.