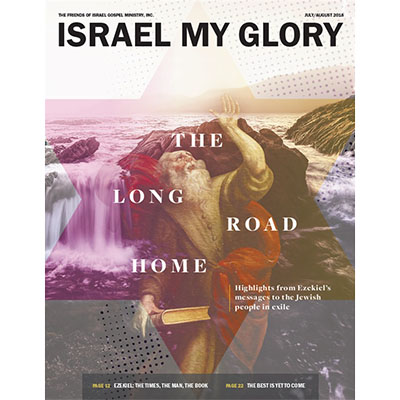 If I Forget You, O Jerusalem
by Steve Herzig
Jewish people the world over cling to the land, the city of Jerusalem, and the Temple—a bond they affirm each year at Tisha B’Av.

Ezekiel: The Times, the Man, the Book
by Tom Davis
This outstanding article takes a three-part look at the Jewish exile in Babylon and the messages God gave His prophet.

The Divine Distribution
by David M. Levy
To whom does the land belong? God reveals the borders and beneficiaries of His sovereign allocation of His land.

The Best Is Yet to Come
by Tom Simcox
Here is a look at God’s promises to Israel in Ezekiel 36—37.

The Coming Invasion
by Mike Stallard
A conflict is coming unlike any other. It’s the Battle of Gog and Magog.